How Not to Be The Side Chick

How Not to Be The Side Chick

I have found that I get so many inquiries on ClassyBlackGirl.com regarding, The Side Chick. Being the side chick, side chicks to note and what to do on official side chick notification day-Valentine’s Day.

It dawned on me that I had not written a post on how NOT to be the Side Chick. I know that even the best of us have gotten shoved into that side chick position, maybe we were not paying attention, maybe we were aware but just didn’t care or maybe you were the main chick and a bigger better chick side-chicked you. However it happened we all know that side chick status does NOT feel good.

We can all create justifications on how it happens and that it’s different with your man…all that aside, I have 10 Tips on how NOT to be the Side Chick!…with bonuses!

MEN, DO NOT READ, I AM DROPPING ALL OF YOUR SECRETS AND TRIFLING TRICKS!

1. Know how and when to ask the right questions, like “Who do you live with?”
Sometimes a questions THIS simple can give you your answer. Hemming or hawing means it’s a wrappers!

2. Take note of when you talk on the phone.
If you always talk at odd times, like in the morning or when he is on the way home. Take Note. This does NOT mean that he has somebody at home…but just pay attention. Men like to cupcake at home too, but if you never talk to him at home-its probably because he cant talk at home.

3. Please check out his RING finger.
This might be simple, but some women do not even bother to check out the tan lines on his ring finer. If he has them…he is GONE.

4. Do not tolerate manipulation of your time.
Is he always busy when you want to talk or get together at the spur of the moment, but always really demanding of your time when he is available-like there might not be that much of his time. Pay attention.

“Roses are Red, Violets are Blue. If He is always busy, the Side Chick is YOU.”

5. Ask about “unexplained time” if it happens frequently.
This does not apply when you are dating and not committed or even close. When you are supposed to be his only chick, unexplained time is basically unacceptable. Remember that there is a way to say anything, you don’t have to sound like a crazy woman to ask about why he always seems to be unavailable on Saturday Nights.

Make Sure that You are Following Me on Twitter! >>> @ClassySharelle

6. Take note of his cell phone.
If his phone goes OFF at certain times, catch this tea. He either has a side chick or you are her.
When you are together is his phone turned over?…like you cant see the incoming calls or text messages?
Also are his text messages set to “iMessage” so that you cant see the actual message if it pops up-just that there is a message? 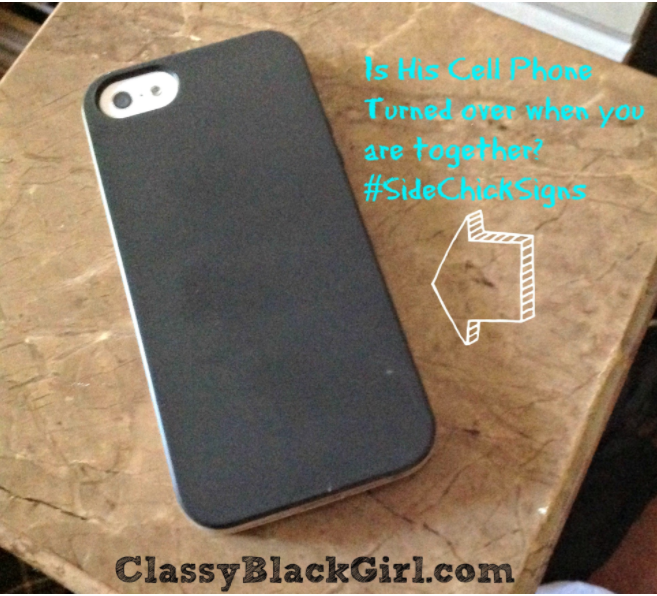 7. Be mindful of how he communicates with you.
Does he return your phone calls with a text?
Does it take him hours to return your calls?
And does he sometimes text back, “I can’t talk.” ….with no explanation?
Either he has bad manners(and just isn’t that into you) or is treating you like a yo-yo-either way shoot him the deuces.

8. Listen to his words, “I think that it was you that I was telling…”
What??…You better take that as a BIG Side Eye….honey you are DAMN Sure not the only one!
Who the hell else were you telling?

9. Have dinners in town, in social areas where you may see people that you both know.
Are your dates in the city that you live in or do you seem to always take long drives for “romantic dinners” that you could have had in town? 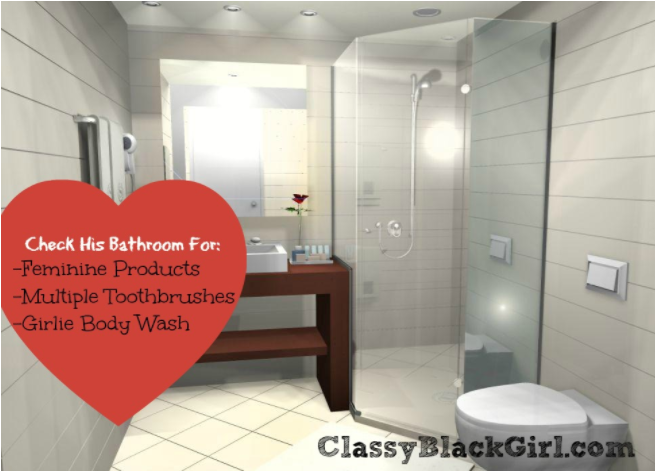 Make sure that you are not always spending time at your house. Hang out at his house as well. Be aware of sh*t. If you see other women’s items such as hair pins, shoes or jewelry? She left that just for YOU to see. Especially check his bathroom closets and under the sink, pads and tampons are THE most scandalous ways that a woman can leave her presence. Also, check his shower and how many toothbrushes you see.

Be glad that she left that there…she already knows that he cheats, but she is caught up. Catch yourself and RUN!

Do not be the side-chick, it only leads to heartbreak…or worse bad Karma for when you finally find THE ONE. The last thing that you want is some slimy side-chick hanging around doing all that she can to take your place.